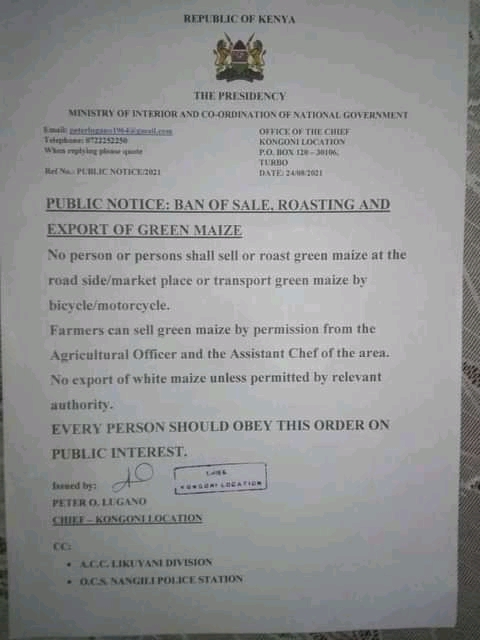 No Comments on KPL Condemns Ban of Sale and Roasting Green MaizePosted in Peasant rights By AdminPosted on August 29, 2021August 29, 2021Tagged Constitution of Kenya, United Nations Declaration on the Rights of Peasants and Other People Working in Rural Areas

The Kenyan Peasants League is dismayed by the decision of the Chief or Kongoni Location Mr Peter O Lugano in Turbo Uasin Gishu County in Kenya to ban the sale and roasting of green maize in the location and is calling for immediate lifting of the ban.

In a notice seen by KPL, also copied to Assistant County Commissioner, Lukuyani Division and Officer Commanding Police Station, Nangili Police Station, the chief states that “No person or persons shall sell or roast green maize at the roadside/market place or transport maize by bicycle or motorcycle”. The notice goes on to state that farmers can only sell green maize by the permission of the Agricultural Officer and the area Assistant Chief.

KPL condemns this move with strongest possible terms and is asking for the lifting of the ban as it goes contrary to the article 2(1) of the United Nations Declaration on the Rights of Peasants and Other People Working in Rural Areas (UNDROP) that obligates the Kenyan Government to respect, protect and fulfil the rights of peasants other people working in rural areas. The ban also goes against article 3 of the UNDROP stating that peasants have the right to full enjoyment of human rights and fundamental freedoms recognized in the Charter of the United Nations and that they have a right to determine and develop priorities and strategies to exercise their right to development and it obligates the Kenyan Government to take appropriate measures to eliminate conditions that cause or help to perpetuate discrimination. Furthermore, the notice is contrary to the article 27 of the Constitution of Kenya (CoK) stating that state every person has the right to full and equal enjoyment of all rights and fundamental freedoms including article 43(c) of the CoK stating that every Kenyan has a right to be free from hunger and to have adequate food of acceptable quality.

The KPL is therefore asking the government to immediately list the archaic, colonial and primitive ban within seven days failure to which KPL shall take appropriate legal measures including those enshrined under article 22 and 37 of the Constitution of Kenya.