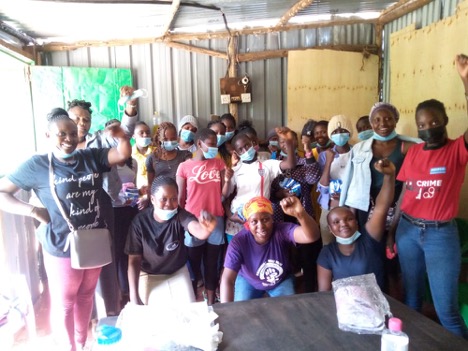 The KPL-WC brings together women peasants who are members of the KPL and organizes itself using peasant feminist approaches, including the rights of women to own land, seeds, water, and resource governance structures and dismantling patriarchy by deconstructing the logic of power that is male-dominated.

Empowerment means the action of empowering girls to have the freedom to make choices in their lives, Bodies, and Health Rights The empowerment started in 2019 during the pandemic of COVID19 because the pandemic caused a lot of harm to economic well-being and due to early pregnancies KPL women collectively thought of starting to empower girls within our communities. And we aimed to achieve our target to empower more young girls so that they know their rights and reduce gender-based violence, sexual gender-based violence, and early pregnancies to empower girls how to defend their rights in the community and also grant girls their rights to live and give equal opportunities. Empowerment revolves around the concept of establishing equality for all genders

Empowerment can only be brought when girls are made aware of their rights because most girls grew up believing that they are of lower quality to boys and this made most girls surrender before the patriarchal structure of the community. We need to empower more girls so both boys and girls are treated equally in society and girls can achieve anything if they are determined to do so.

Girl empowerment is a widely discussed topic in today’s society and talks about the uplifting of the female gender but it is a difficult protest against discrimination based on young girls.

The effort to empower girls and improve their health and well-being should be a social rule at the school, community, and grassroots levels.

Empowering girls and achieving gender equality is important to creating an open, free, successful community. We contribute to this agenda by creating opportunities for dialogue to influence policies that benefit girls.

Prepared by Mildred Nduta and Edited by Susan Owiti